The sand cat, also known as the desert cat, is an extremely rare species of wild cat that can be found in the desert regions of Morocco. An endangered species, this cat is revered in many parts of the world for being the faithful companion of Muhammad. Moreover, it has an atypical physique that makes it look like a kitten all its life.

1. He lives in the desert

The sand cat, as its name suggests, evolves in the sandy regions of the planet. The main dwelling places for these adorable animals are North Africa, Saudi Arabia, Central Asia, and Pakistan. But they can also be found in rocky plains or rocky valleys in the mountains, where there is little vegetation.

2. It can survive extreme temperatures

Adapted to arid zones, it is able to survive temperatures ranging from -5° to 52°C. 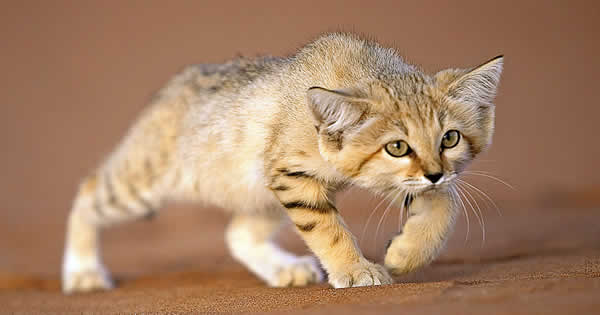 3. He spots his prey with his ears.

A nocturnal animal, the sand cat is an outstanding hunter that locates its prey with the help of its large ears. In fact, its ears are oversized, which gives it a particularly sharp sense of hearing. This feature gives him the ability to locate his prey even under the sand, which is essential for him to feed and therefore survive in this hostile environment.

4. It knows how to make reserves

The sand cat hunts mainly rodents, insects, lizards, and even snakes. In addition, the small feline sometimes stores its prey by burying it in the sand to come back later to eat.

5. He has a special technique for killing snakes…

To kill snakes, the technique of the sand cat is very special. It stuns them with its paw and then bites them on the neck to finish them off. 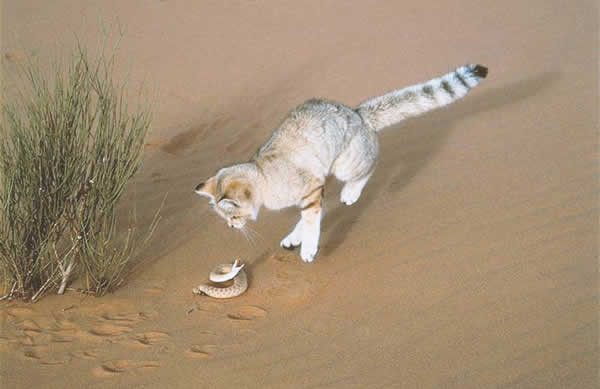 6. He is one of the small felines

The physics of the desert cat is very original. Its small body is round and its head is a little larger. Even in adulthood, this cat keeps a very small size, which gives it the appearance of an eternal kitten. Indeed, it can weigh up to 3.5 kilograms and measure up to 55 centimeters.

In the wild, a sand cat can live up to 13 years. However, most kittens die before their first 30 days of life, mainly because their mothers abandon them.

7. He’s an ace at camouflage

Its thick coat is usually sand-colored, which allows it to camouflage itself easily. It has tufts of hair on the pads of its legs to protect it from burns when traveling on hot sand (whose surface temperature can reach up to 124°C at the peak of. This also gives it a better grip. 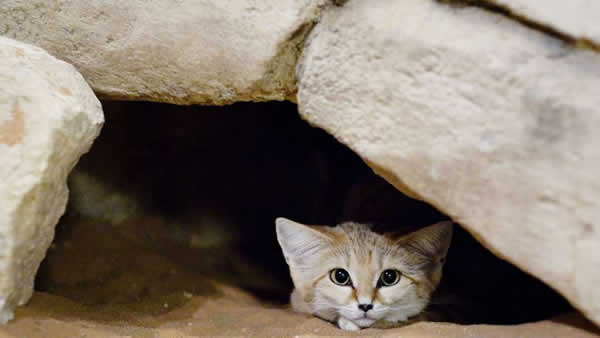 8. It hardly needs any water

One of the surprising peculiarities of this cat is that he hardly needs water since he finds enough in his prey to feed on. Its urinary system allows it to keep its urine preciously the time to find drinking water, a rare element in desert regions. It can, therefore, survive for many days without drinking.

The sand cat is a very solitary feline with a territory of about 16 km2. The only time it is in contact with other members of its species is during reproduction. A nocturnal animal, it spends the day in its burrow dug in the sand or underbrush. It is when the sun begins to set that the desert cat comes out of its underground hiding place and goes hunting.

At night, the sand cat can travel up to 5 kilometers. When it returns to its burrow at dawn, it spends a few moments lying outside to warm itself with the first rays of the sun. It then returns home for the day. 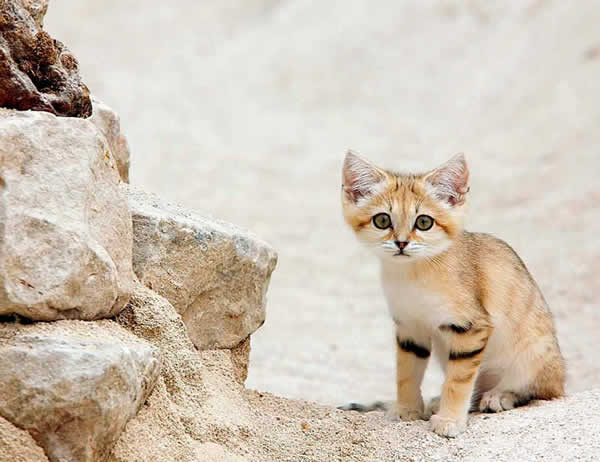 There are many dangers that threaten the desert cat. In its natural habitat, it can be bitten by poisonous snakes, attacked by birds or wild dogs. But it’s humans that pose the greatest threats to this small wild cat. The sand cat trade has been and still is, very active. Their incredibly soft fur is highly prized by poachers. Others are captured for sale as pets. 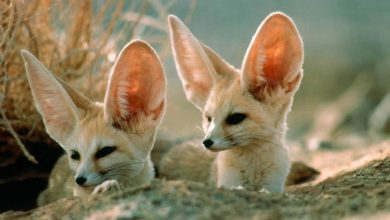 The unsuspected wildlife of Morocco