On November 6, 1975, King Hassan II of Morocco made a historic speech calling on the Moroccan people to undertake a long and peaceful march southwards to liberate Western Sahara from Spanish occupation. It is the Green March, an unprecedented event in the history of the 20th century, which will bring together 350,000 volunteers from all over the country and end the Spanish domination without any use of violence. The event has left its mark on people’s minds; it is said to be a brilliant political move on the part of King Hassan II.

A story that never ceased to amaze

Western Sahara became a Spanish colony at the end of the 19th century. It is a desert territory of two hundred and sixty-six thousand square kilometers, populated by nomadic tribes, which shares borders with Morocco, Algeria, and Mauritania. It has always been claimed by Morocco. On 16 October 1975, the International Court of Justice in The Hague recognized Western Sahara’s legal ties of allegiance with Morocco and Mauritania. King Hassan II of Morocco then decided to take action and asked the Moroccan people to “march as one” to the southern provinces to free their territory.

This call triggered an immense popular fervor and more than five hundred thousand Moroccans flocked to Tarfaya near the border of Western Sahara. A system of drawing lots will then designate three hundred and fifty thousand civilians to organize a peaceful Green March and cross the border of the occupied territories. The volunteers wave the Moroccan flag in one hand and the Koran in the other to mark their territorial claim. The event has left its mark on people’s minds; it is said to be a brilliant political move on the part of King Hassan II.

Spain signs the Madrid agreements and the territory is shared between Morocco and Mauritania. The withdrawal of Spanish troops took place between 1975 and 1976. But in the same year, the Polisario Front, which was fighting for the independence of the Sahara, proclaimed the Sahrawi Arab Democratic Republic (SADR), with the support of Algeria. This was the beginning of the long Western Saharan war.

Since that date, sovereignty over this former Spanish colony has always been disputed between Morocco and the Polisario Front. After years of fighting, a ceasefire was signed in 1991. Today, although Morocco administratively controls most of the territory, the UN does not recognize Moroccan sovereignty over Western Sahara, which it considers a Non-Self-Governing Territory. The question of Western Sahara, therefore, remains deadlocked.

In the video below, you can see around minute 1:26; the gathering of the Moroccan people for the historic Moroccan Green March.

“There’s only one thing left for us, dear people. We must accomplish a Green March from the North of Morocco to its South, and its East to its West… We must, dear people, act as one in order and discipline and reconnect with our brothers. ».

This national event, which took place, like said before, on November 6, 1975, marked a turning point in Morocco’s history. The march was greeted by the whole world and will remain forever engraved in the memory of Moroccans and in the annals of history. 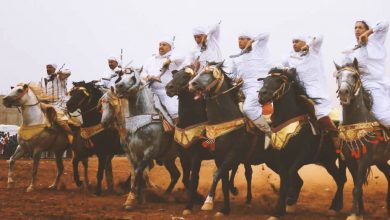 The horse, an integral part of the Moroccan history