The Atlas lion and elephants have now disappeared. Some barbary macaque or magot monkeys, jackals, and lynx still haunt some mountainous regions. On the edge of the desert, bustards, gazelles, and fennecs are rare.

Moroccan avifauna is extremely diverse. There are more than 300 species of birds.

Morocco is home to many species of ducks, several species of swallows and swifts, and storks are part of the landscape. Among the sedentary species, let us mention the partridge, many varieties of warblers, gangas, pheasants, quails… Birds of prey lovers will observe the Egyptian vulture, the griffon vulture, falcons, harriers, and kites, without forgetting the booted eagle or the golden eagle.

In desert regions, reptiles are distinguished: turtles, agame, viper, cobra. In the spring, you will be surprised by the massive outbreak of butterflies in the Ifrane region.

The 7 felines of Morocco

Did you know that in Morocco there are 7 different species of felines, only one of which is extinct in the wild: the lion is, however, subject to a captive conservation program. The others all survive on the brink of extinction in the wild, without any conservation program, in indifference (except from poachers) and ignorance on the part of everyone, but they are probably still there.

Less than 5 individuals of leopards probably live in the Azilal region, very few cheetahs in the border region with Algeria. A few months ago a serval was observed in the Middle Atlas region. The caracal, which is also on the verge of extinction, is very rarely observed.
The sand cat is becoming increasingly rare. Finally, the gloved cat that survives as best as it can, only because it is often mistaken for a cat. In the worst-case scenario, the leopard and cheetah would be extinct in the wild. A very sad and real possibility that would be synonymous with total extinction (the Moroccan descendants of these felines do not exist anywhere in captivity) of local species, having evolved and adapted to their respective regions, and so constituting unique and typical characteristics.

The 8 potentially dangerous Moroccan snakes (out of 25 species)

Nowadays, people can walk around in the Moroccan wilderness without really having to fear being attacked by animals. If the great predators have almost all disappeared, there are still a few beings who continue to titillate the primary human fright that is “the fear of the beast”. These are of course species that nature has sometimes equipped with weapons to hunt and defend itself: poisonous species. Far from the fangs and brute force of a large predatory mammal, poisonous and potentially dangerous species have a bad reputation for being discreet and are claimed to be “devious”. This is how we can see everywhere among the inhabitants of Moroccan countries, a fear of everything that can be a carrier of poison (except bees?).

As a result, all snakes, whether snakes, vipers, cobras, as well as scorpions and spiders, are considered evil and harmful beings that must be exterminated at the first opportunity. It goes without saying that this exaggerated fear exists because of hundreds of incidents that have occurred and unfortunately resulted in casualties. But do these fears and accidents justify systematically exterminating these species? Are these beings all dangerous?

Naturalists who have done a lot of fieldwork and research in this field, have distinguished 25 species. It is interesting to note that among the 25 species, 5 have a poisonous apparatus. But their hooks are located at the back of the jaw and cannot be used against humans. Except in very exceptional cases in two species: the Montpellier snake (Malpolon monspessulanus) which is this snake very frequently put around the neck of tourists in Marrakech and the Moïla snake (Malpolomoilensis) known to imitate the defensive posture of the cobra…
The remaining 12 species have no venom at all.

To the question “are there penguins in Morocco?”, the answer is yes. This may seem surprising to many, except that everything can be explained once attention is drawn to the confusion that often exists about the bird’s name.

The mistake (confusing penguins and manchots) was first made by English sailors. The latter had already seen penguins because they are present on the English coast. When they saw their first manchots, they mixed up with the great penguin they knew, a species that is now extinct.

The only species of penguin that can be found in Morocco is the razorbill (Alca torda). It’s a species of bird of the Alcidae family. It is a penguin from the North Atlantic to the Barents Sea. 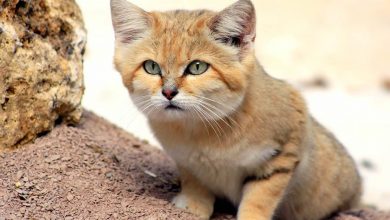 Learn 10 Things About The Sand Cat Who Lives In Morocco